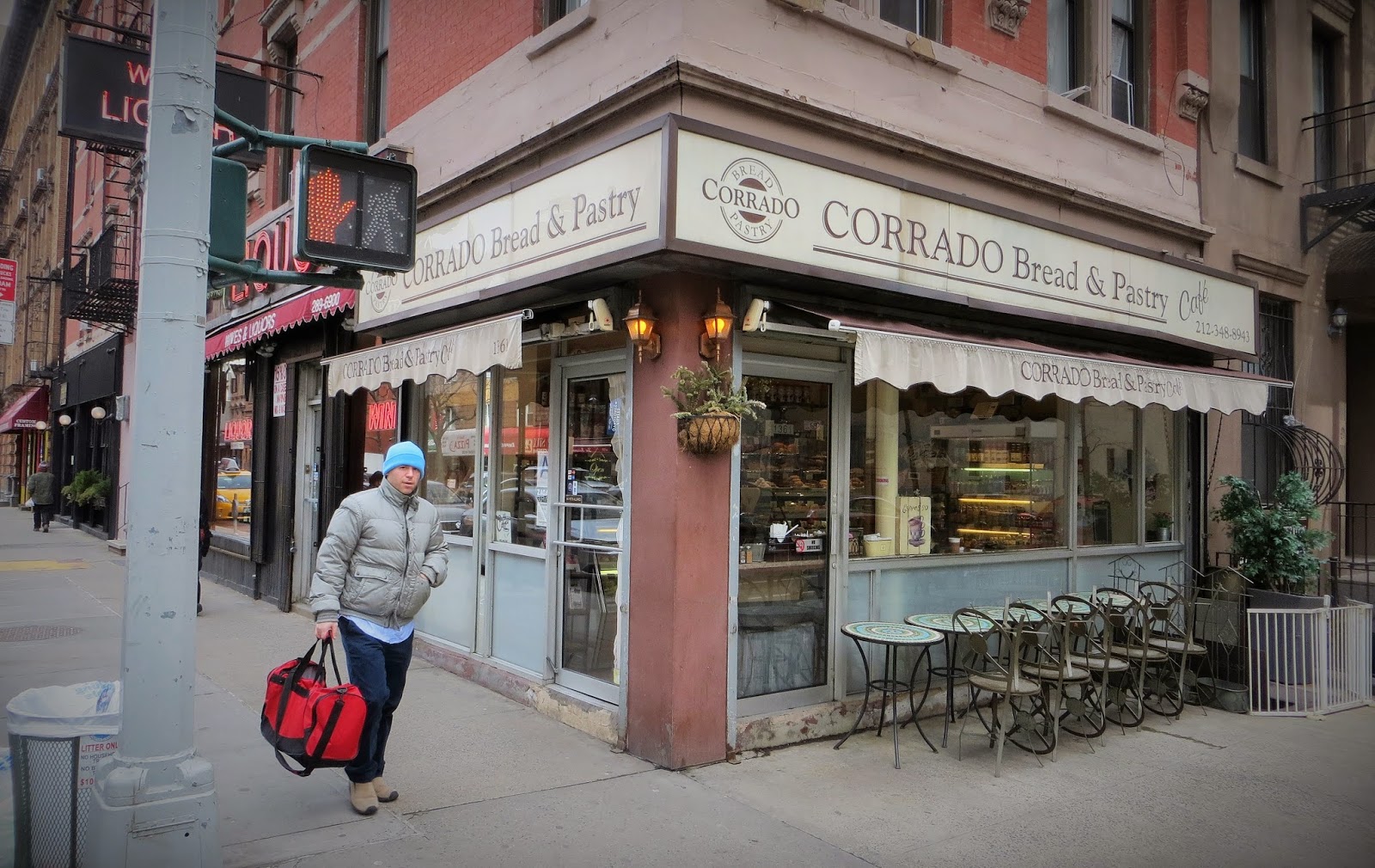 I repeat...the street art scene in Bushwick, Brooklyn is strong! As recently as two years ago, these buildings were not so sexy. Here's a then-n-now (courtesy of Google Maps Time Machine and NYC Corners). Note the sophisticated NYPD surveillance mechanism attached to the light post.
CLICK TO ENLARGE 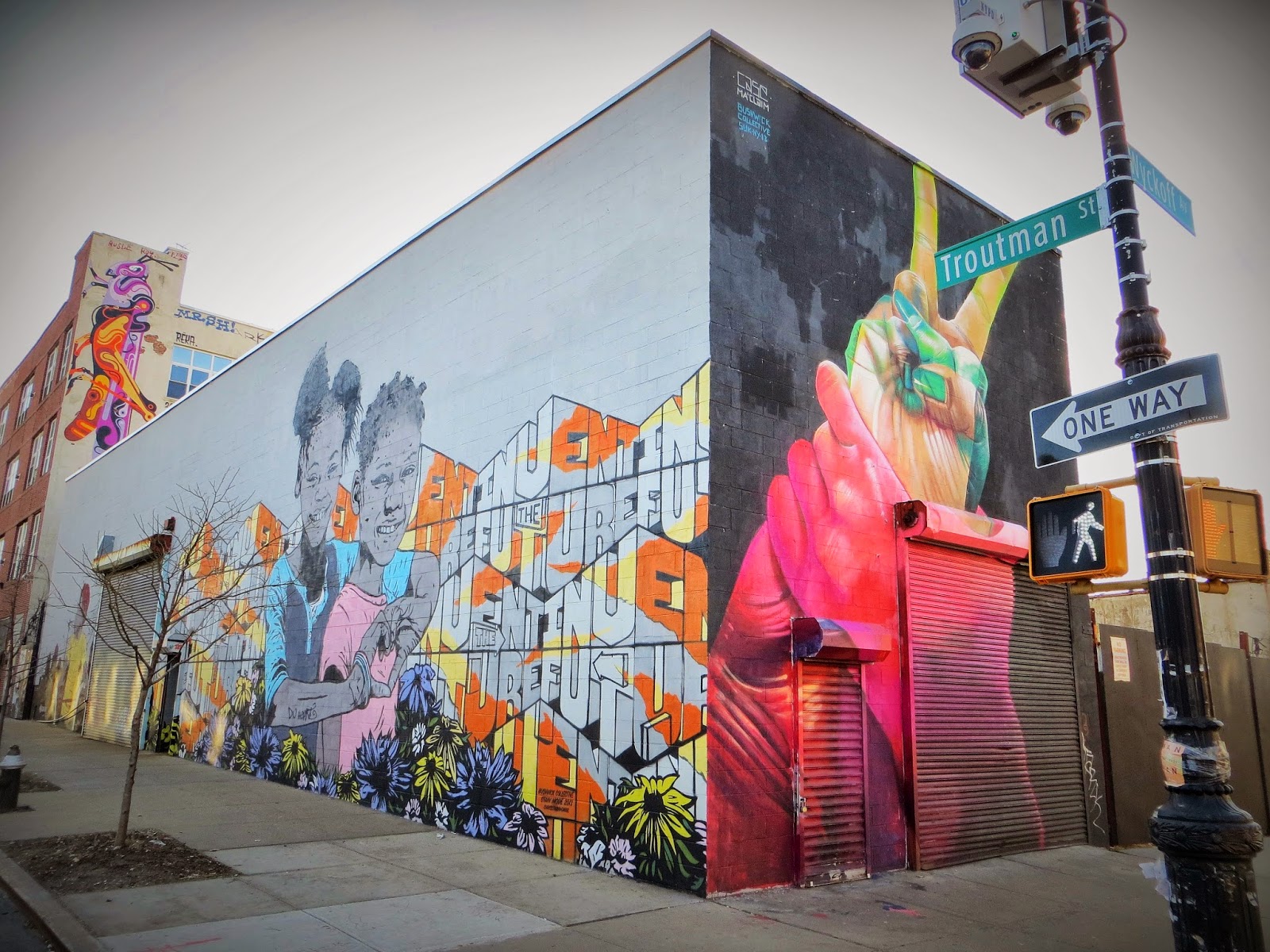 A shirtless bicyclist rides past a graffiti'd box truck parked in front of Phebe's Tavern & Grill on Bowery and 4th Street. Anyone know anything about "Pope III?"           CLICK TO ENLARGE 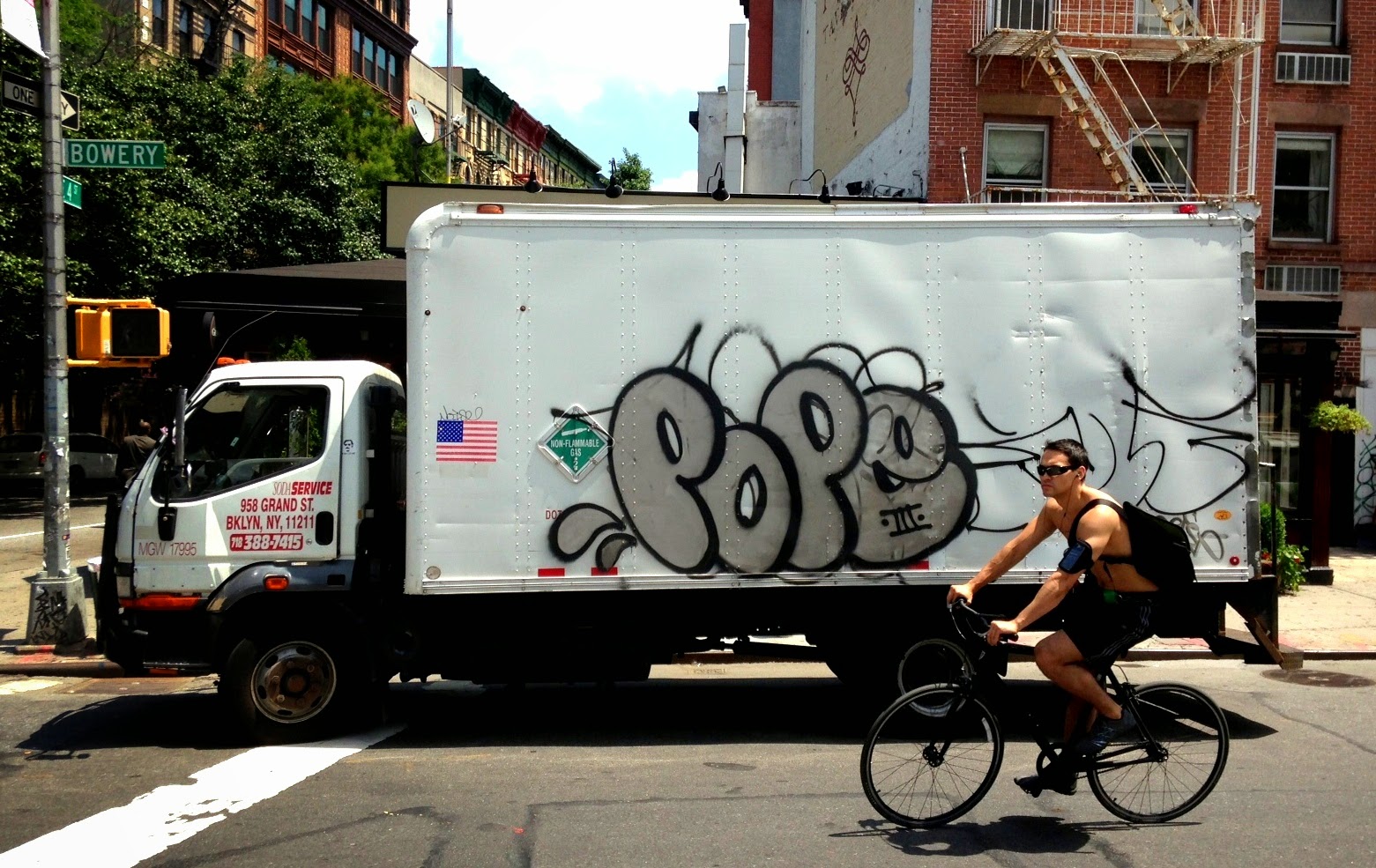 For years, in bookstores, I've always found myself skimming through the amazing photo book, "Store Front: The Disappearing Face of New York," by photographers James and Karla Murray. A decade after publishing the book, the Murrays have gone back to re-photograph the same storefronts to highlight how much they've changed (or, stayed the same) over 10 years. (Original photos are from the early 2000s.) Interestingly, I've always planned on doing the same thing (re-photograph the 'best of' NYC Corners) in five or ten years. Here's are some of James' and Karla's more "corner-friendly" samples... 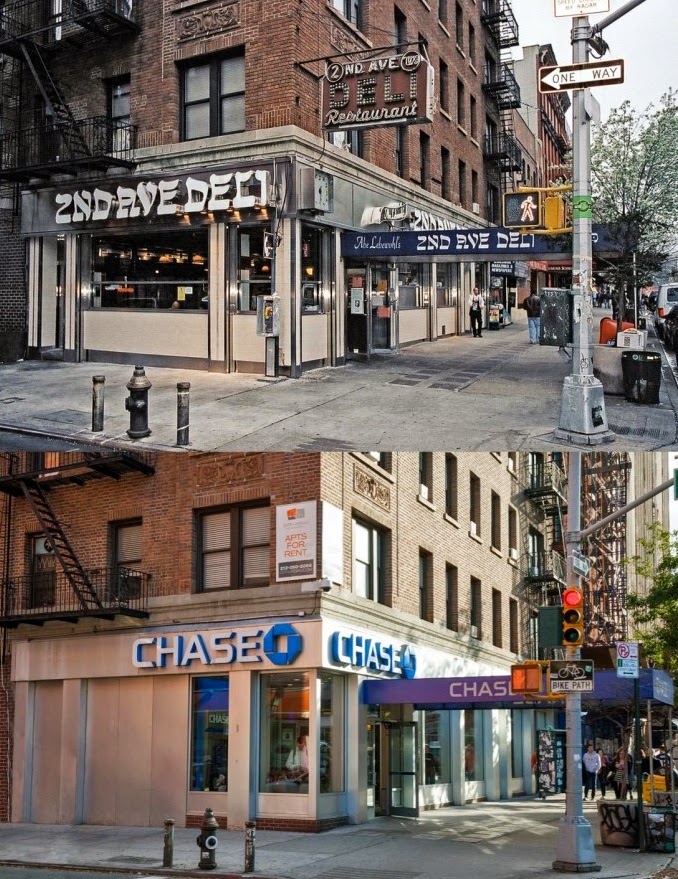 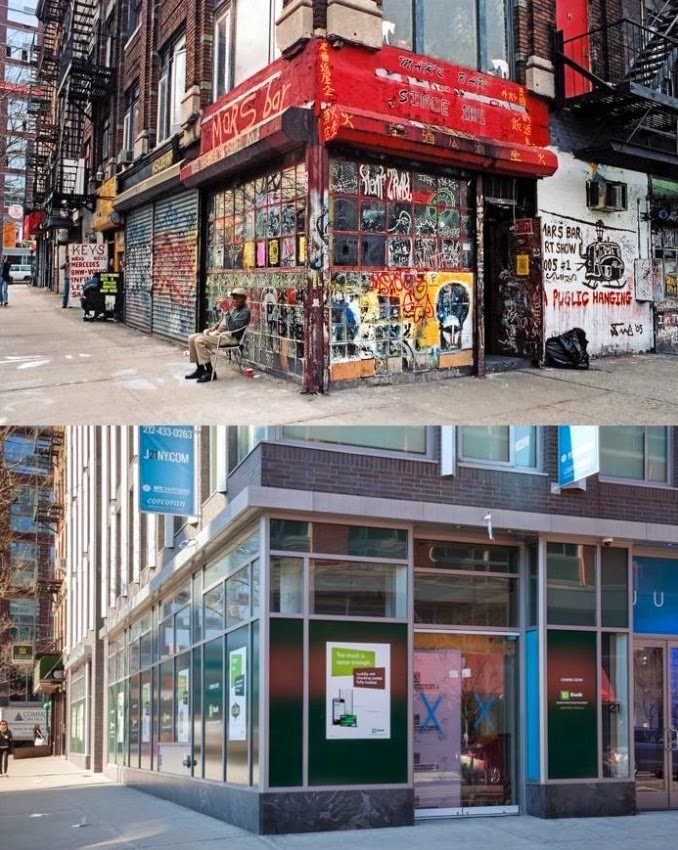 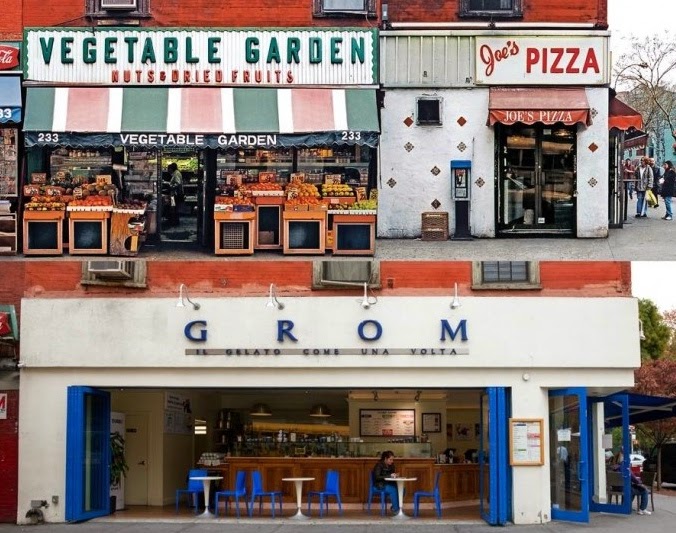 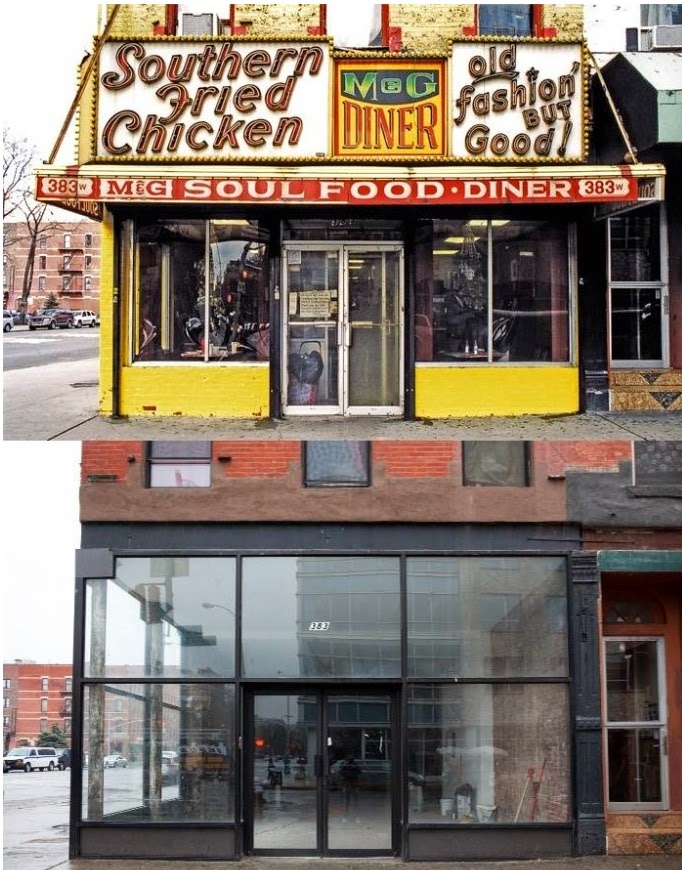 Bicycles, graffiti, and Chabad of North Brooklyn in Williamsburg.         CLICK TO ENLARGE

An abandoned building in East Harlem, its windows cemented shut with cinder blocks. This stretch of "Spanish Harlem" isn't as bleak as it looks in this photo, though. Especially when New JFK Fried Chicken & Pizza offers "Breakfast-Burgers-Pizza-Seafood-Ice Cream-Soda."     CLICK TO ENLARGE 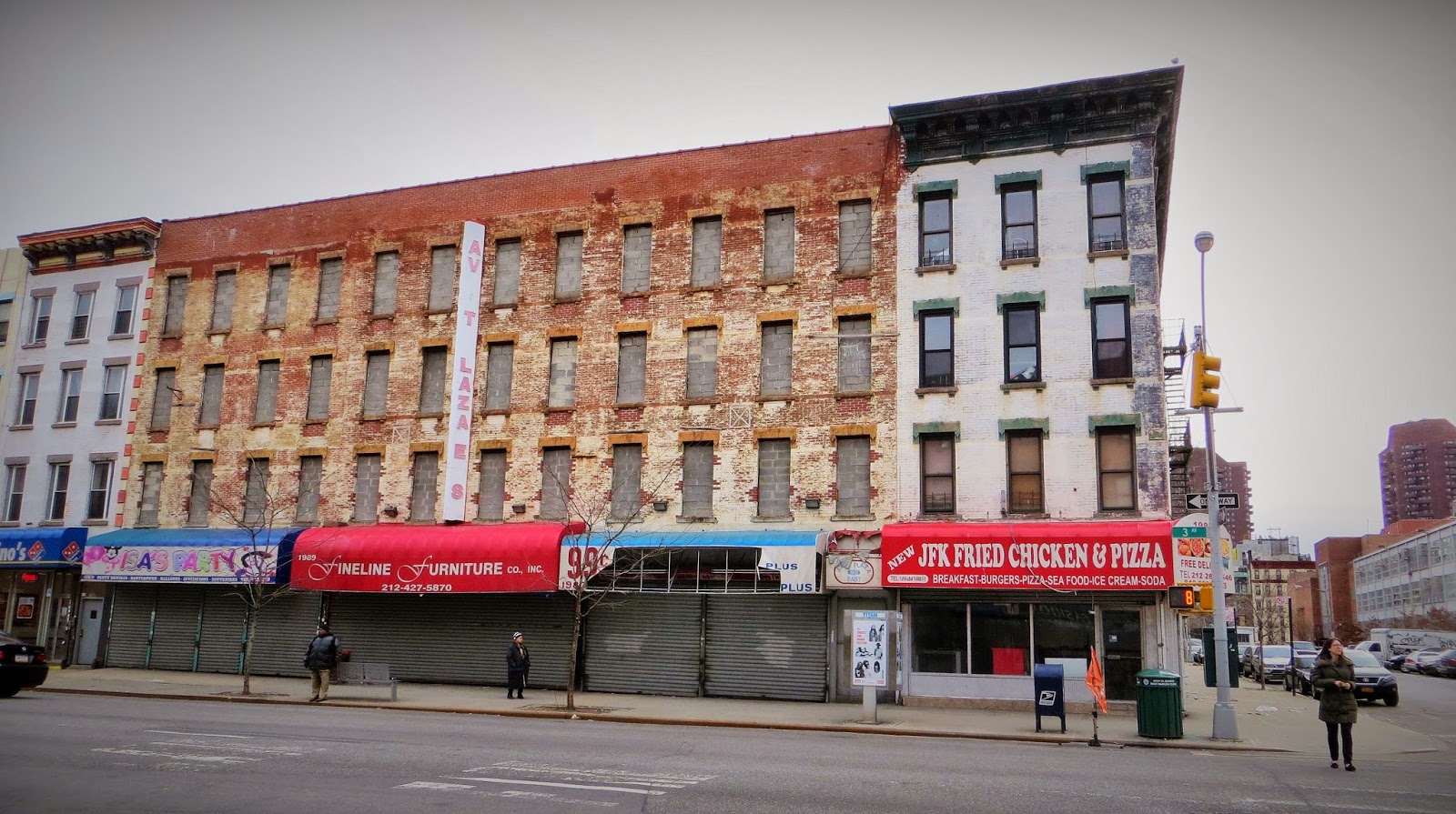 The graffiti / street art scene in Bushwick, Brooklyn is strong to very strong.      CLICK TO ENLARGE 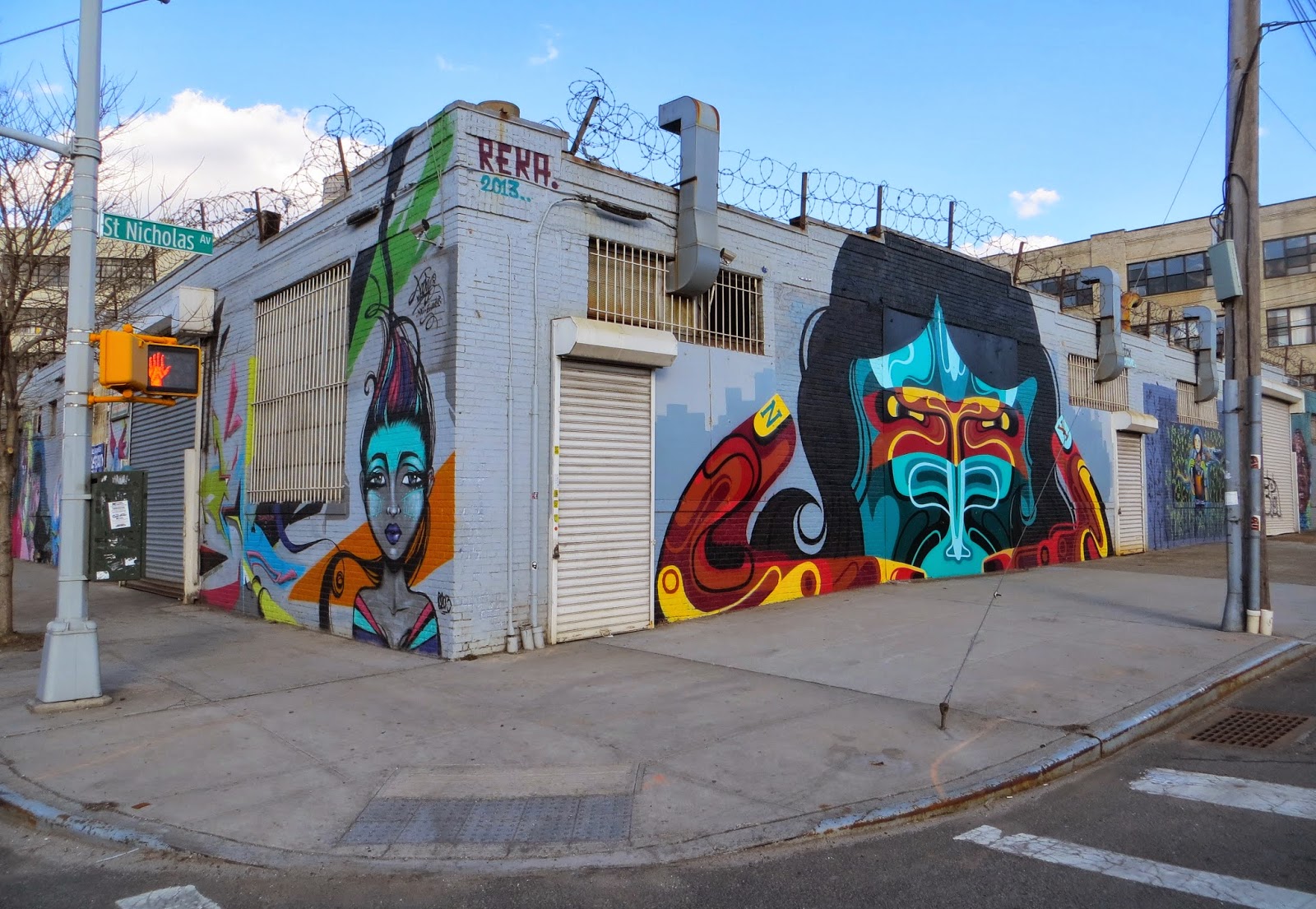 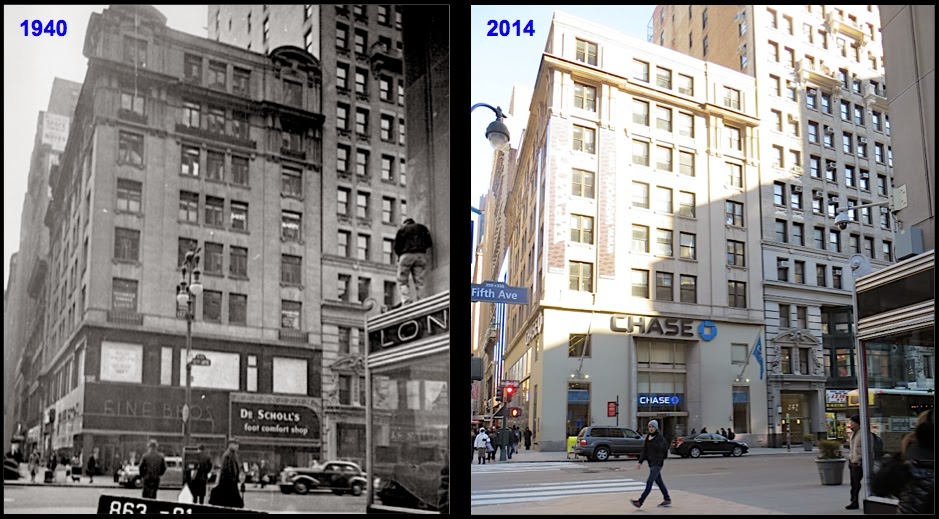 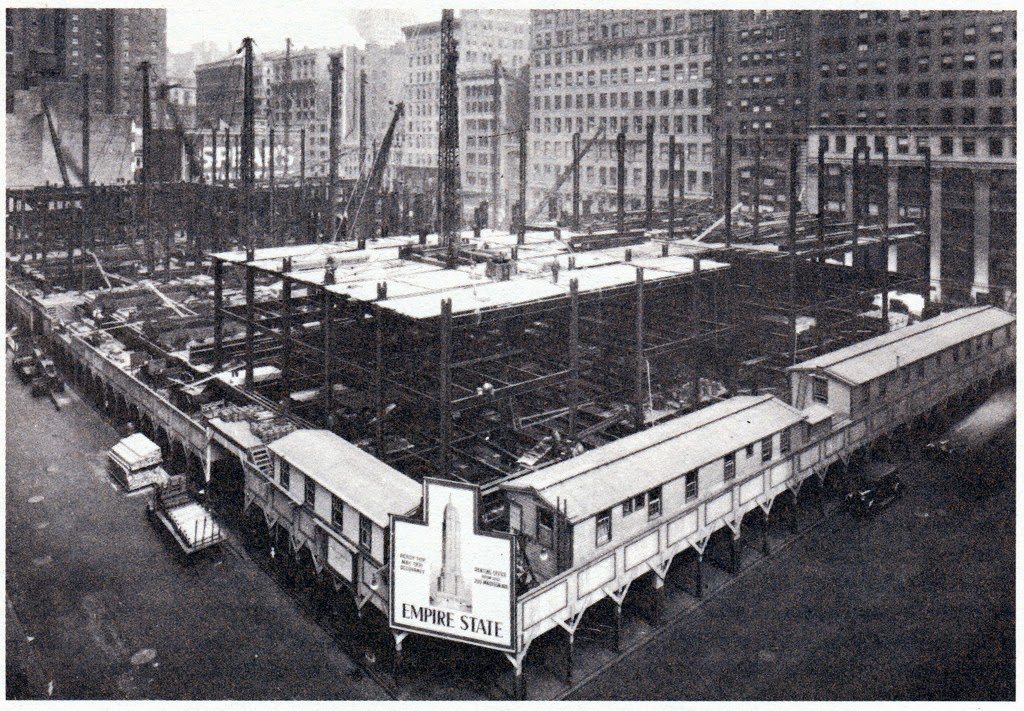 Old folks make their way through the snow in Chinatown, near Oro Bakery and Bar.  CLICK TO ENLARGE 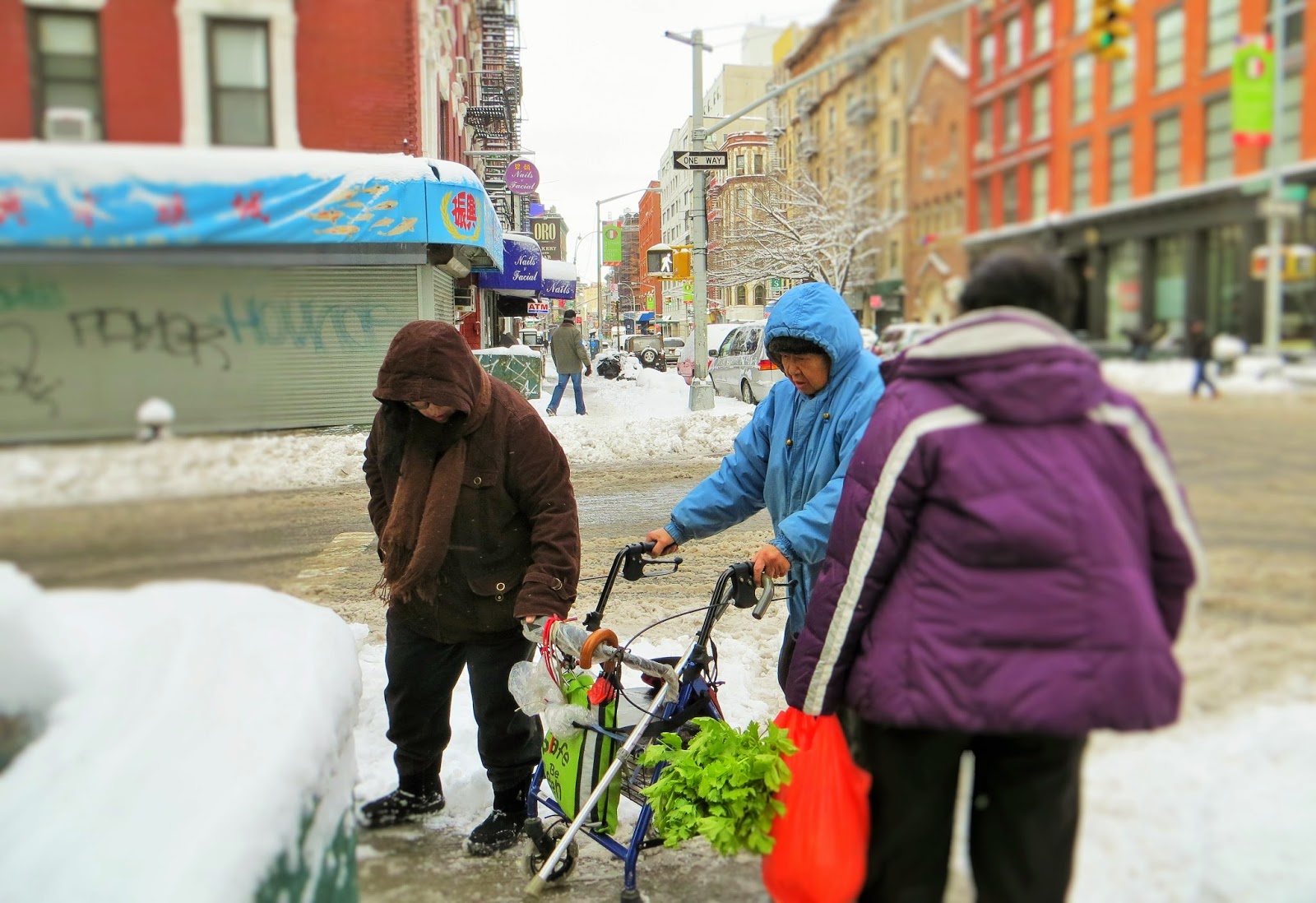 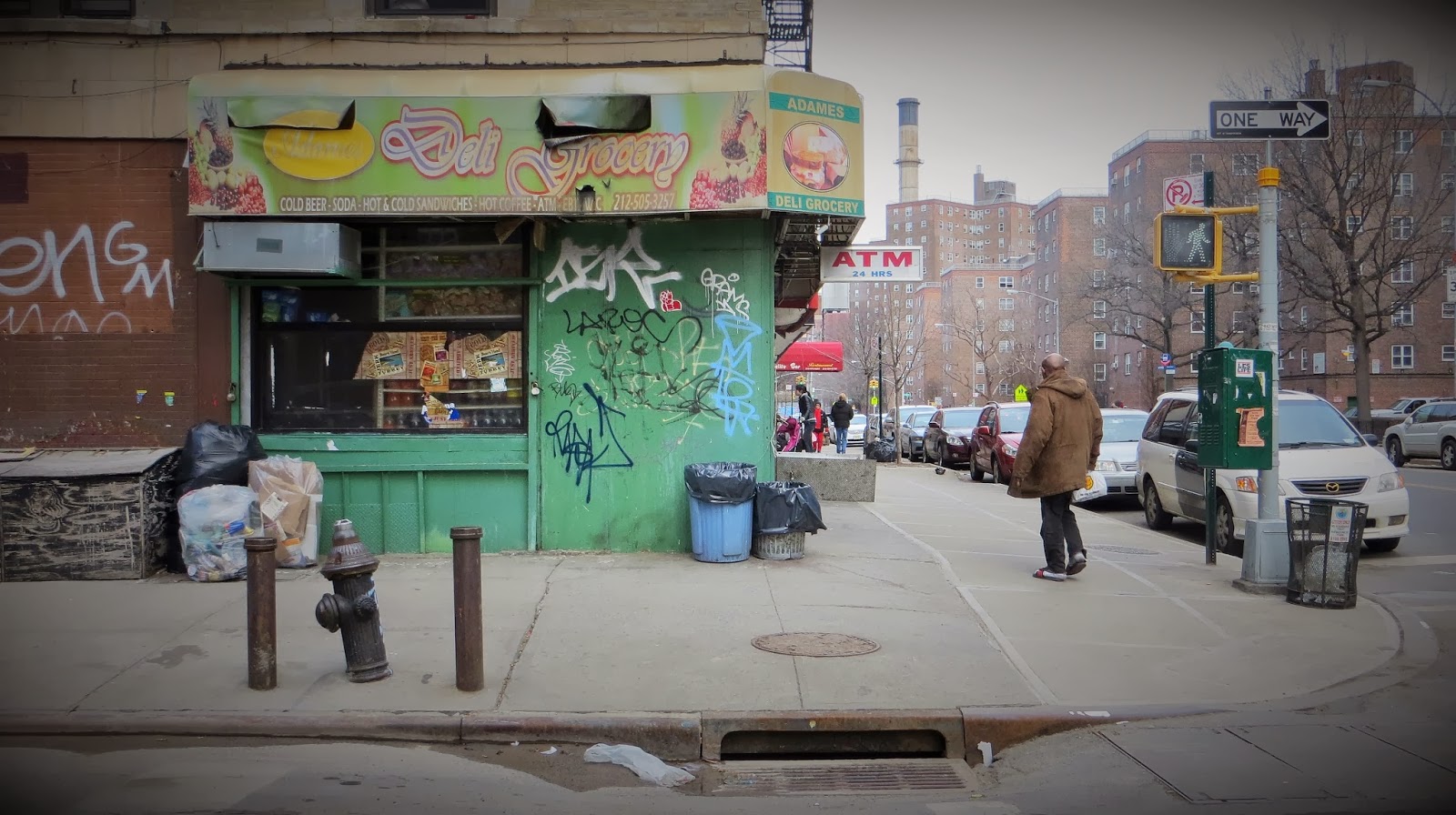 Serving the downtown Manhattan / Financial District area for more than 50 years, Pearl Diner was closed for nearly 6 months after Hurricane / Superstorm Sandy. (This photo was taken a month before the storm). It reopened in March of 2013. Classic Diner. Classic Neon Sign.  CLICK TO ENLARGE 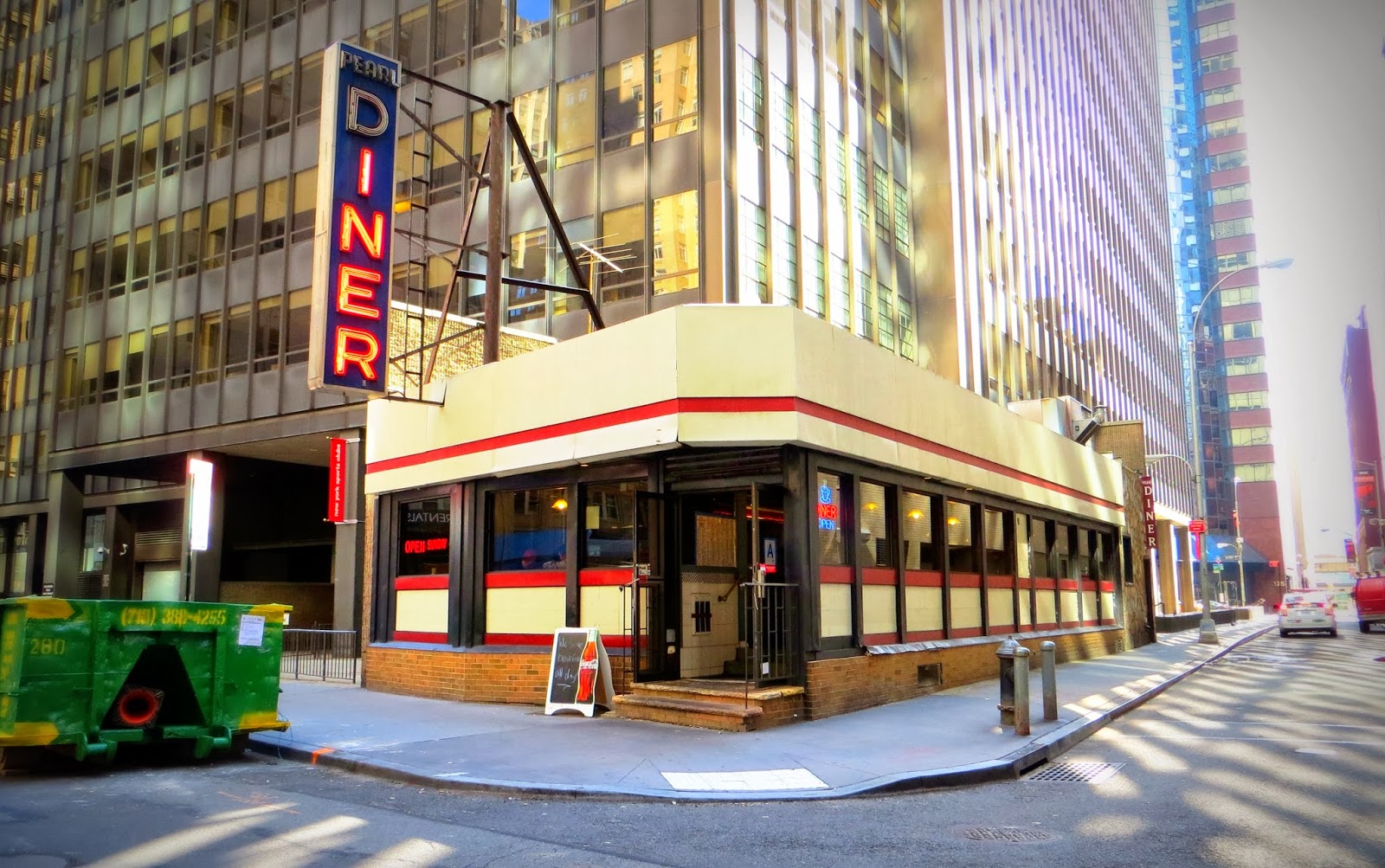 EVGrieve says:  "The Sushi Lounge closed at the end of October ... and eventually relocated a block and a half to the west on St. Mark's Place. Alex Stupak, the chef at Empellón Cocina and Empellón Taqueria, plans to open his third restaurant here."         CLICK TO ENLARGE 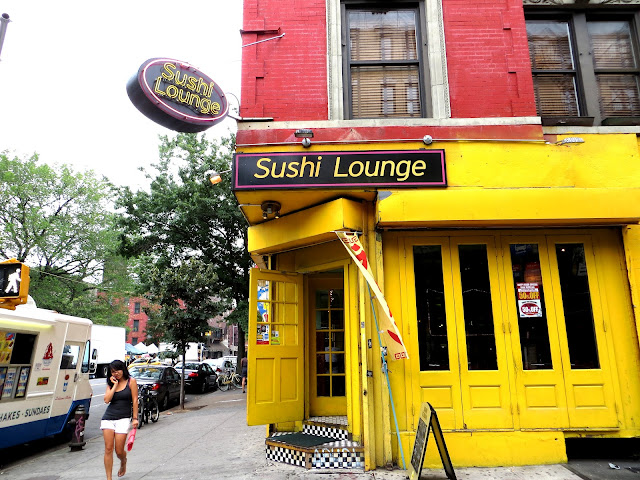 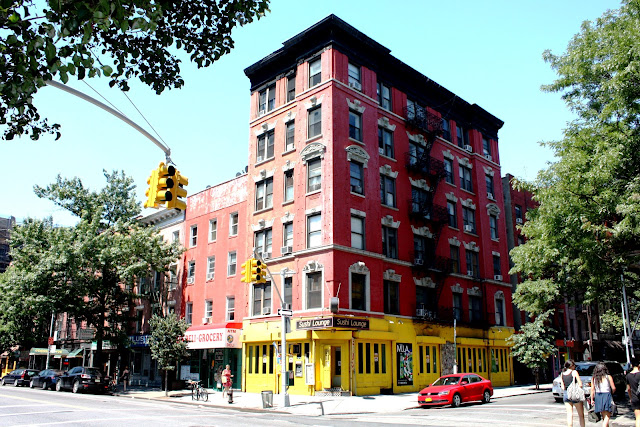 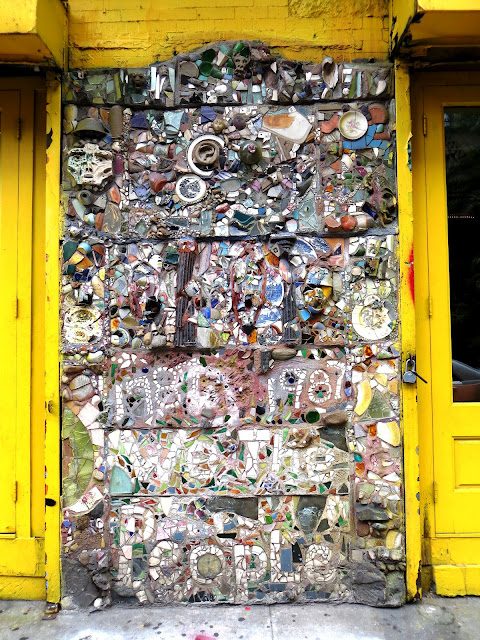 Who remembers the Tower Records in Greenwich Village? It was a fixture on East 4th Street and Lafayette from 1984 through 2006. Today, the space is occupied by MLB Fan Cave, I think. MTV's Kurt Loder said, "Keith Richards used to live upstairs, directly above Tower Records, so he was always outside there late at night walking his dog. And you'd walk up and talk to him, and you wouldn't be able to understand a word he was saying." [I wish I could remember where I found this great photo.]        CLICK TO ENLARGE 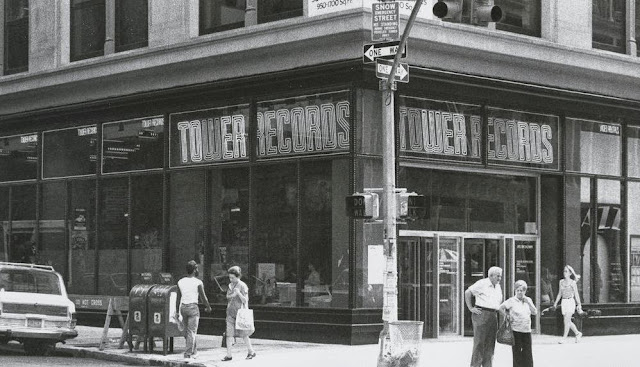 A giant shopping cart with a motor drives down Park Avenue in front of Sarabeth's in the Flatiron neighborhood. The crazy cart is a promotional tool for "Guy's Grocery Games," a Food Network show hosted buy Guy Fieri of "Diners Drive-ins and Dives" fame. Thanks to the lovely and talented @mamamoffa for the photo. 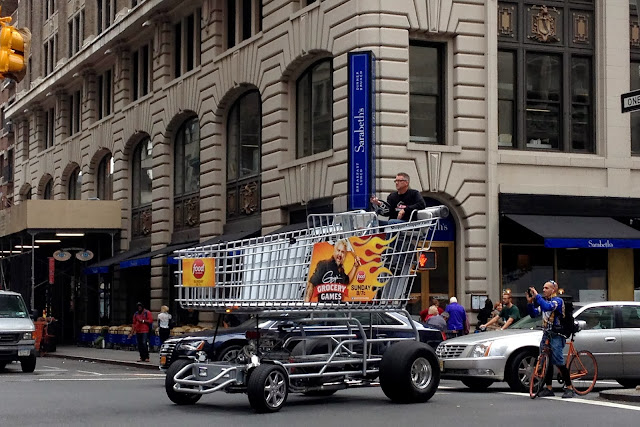