We love the variety of elevations represented in this photo of Sunny and Annie's Gourmet Deli in Manhattan's East Village. The deli is a neighborhood favorite, known for its creative and exotic sandwiches, including a Pho sandwich and the "East Side Ink," named after the tattoo parlor across the street (roast beef, melted jack cheese, red onion, lettuce, tomato.)       CLICK TO ENLARGE 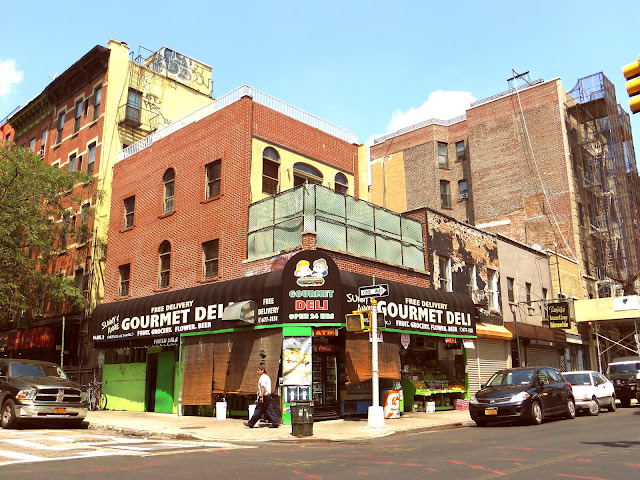 Anonymous said...
This comment has been removed by a blog administrator.
September 2, 2014 at 4:22 AM

Anonymous said...
This comment has been removed by a blog administrator.
September 5, 2014 at 3:47 AM

Anonymous said...
This comment has been removed by a blog administrator.
September 5, 2014 at 3:56 PM

Anonymous said...
This comment has been removed by a blog administrator.
September 8, 2014 at 9:58 PM

Canelo Alvarez, boxing's unified middleweight champion, is set to make his 2019 debut against Daniel Jacobs on Saturday in the T-Mobile Arena in Las Vegas.
Alvarez (51-1-2, 35 KOs), will attempt to add Jacobs' (35-2, 29 KOs) IBF belt to his WBA and WBC titles.
It promises to be an exciting fight, and will be available to watch exclusively on DAZN.That said, Sporting News has you covered on everything you
need to know to tune in and watch, offering you a step-by-step guide to tune into
Canelo vs Jacobs Live Boxing IN HD TV.Fans of MMA have a busy weekend ahead, and it
includes a special title match. The Welterweight title-holder defends his title in a tournament that ends in an undisputed champion. See the current
champion in action by watching MacDonald vs. Fitch in Bellator 220 exclusively on DAZN
Bellator 220 is being held at the SAP Center in San Jose, Calif. Coverage begins at 7:30 p.m. Eastern time with the Prelims, and the Main card starts
at 10 p.m. The entire night of MMA is available only on DAZN.

Saul 'Canelo' Alvarez will defend his WBA and WBC middleweight titles against IBF champion Daniel Jacobs in title unification fight in Las Vegas.Canelo returns to the middleweight division to cement his dominance How to watch Jacobs vs Alvarez Boxing Buy Las Vegas Tickets after fighting in another division against Rocky Fielding to obtain the WBA super middleweight title.The American boxer won the vacant IBF middleweight title stripped from Gennady Golovkin after winning by split decision against Sergiy Derevyanchenko last year.Sportsmail will provide you all you need to know for Saul Alvarez vs Daniel Jacobs including time, date and location plus how to watch, ticket prices and latest odds.

While the Primetime Emmys (scheduled for September 22) recognize scripted series you catch after work and on the weekend (think: Game of Thrones, Saturday Night Live, or The Marvelous Mrs. Maisel), the Daytime Emmy Awards honor the people and programs that run between 2 a.m. and 6 p.m.
The 2019 Daytime Emmy nominees Will The 2019 Daytime Emmy Awards Be Televised include household names such as Ellen DeGeneres, Whoopi Goldberg, Kelly Ripa, Ryan Seacrest, and O's very own Gayle King. And while watching the show sounds like it'd be easy, things get somewhat tricky. The National Academy of Television Arts and Sciences (NATAS) also sub-divides the daytime ceremonies into regular and Creative Arts Awards. Confused yet? Don’t worry, we’ve got you covered. Here’s everything you need to know about the 46th annual Daytime Emmy Awards.